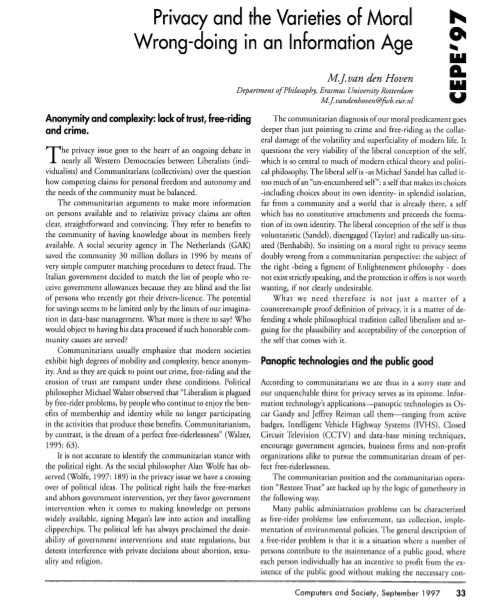 Privacy and the Varieties of Informational Wrongdoing Journal Article

The communitarian diagnosis of our moral predicament goes deeper than just pointing to crime and free-riding as the collat- eral damage of the volatility and superficiality of modern life. It questions the very viability of the liberal conception of the self, which is so central to much of modern ethical theory and politi- cal philosophy. The liberal self is -as Michael Sandel has called it- too much of an "un-encumbered self": a self that makes its choices -including choices about its own identity- in splendid isolation, far from a community and a world that is already there, a self which has no constitutive attachments and preceeds the forma- tion of its own identity. The liberal conception of the self is thus voluntaristic (San&l), disengaged (Taylor) and radically un-situ- ated (Benhabib). So insisting on a moral right to privacy seems doubly wrong from a communitarian perspective: the subject of the right -being a figment of Enlightenment philosophy - does not exist strictly speaking, and the protection it offers is not worth wanting, if not clearly undesirable. What we need therefore is not just a matter of a counterexample proof definition of privacy, it is a matter of de- fending a whole philosophical tradition called liberalism and ar- guing for the plausibility and acceptability of the conception of the self that comes with it.